Ed Asner in A Man and His Prostate 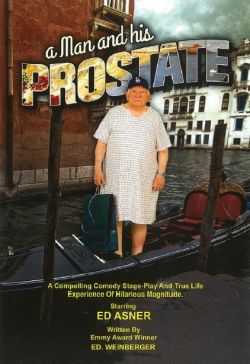 Join JCC Singles for a light reception prior to the show. The reception begins at 6:30 p.m. The show begins at 7:30 p.m.

Ed Asner, winner of seven Emmy Awards, stars in a comedic one-man show based on the real-life experiences of Emmy and Golden Globe award winning master of television comedy writing writer Ed Weinberg. It is a funny look at a serious topic, telling the story of a man as he faces various sudden and unexpected health difficulties while vacationing
in Italy with his wife. Asner guides the audience through a hilarious life-changing journey in a foreign hospital and country where he does not speak the language, as he prepares for the prostate cancer surgery he does not want.

Emmy Award winning actor Ed Asner was catapulted into stardom with his role as Lou Grant in the longrunning hit sitcom The Mary Tyler Moore Show. He has been an enduring presence in television, film and stage for over 60 years. Mr. Asner served two terms as President of the Screen Actors Guild, and has won many awards including induction into the TV Academy Hall of Fame in 1996, the Ralph Morgan Award, and the prestigious SAG Life Achievement Award for career achievement and humanitarian accomplishments. A whole new generation know Ed’s voice as Carl Fredricksen in the animated film Up and as Santa in the movie Elf. He is the most honored male performer in the history of the Primetime Emmy Awards, having won seven.