A State at Any Cost: The Life of David Ben-Gurion

Tom Segev is a leading historian and one of Israel’s most distinguished journalists. Born in Jerusalem in 1945 to parents who fled Nazi Germany, he holds a BA in History and Political Science from the Hebrew University of Jerusalem and a Ph.D in History from Boston University. In the years 2000 and 2010, Segev’s books were included in the New York Times’ Best Books of the Year lists. In 2001, Segev’s One Palestine, Complete was the first title ever to win the National Jewish Book Award in two categories. 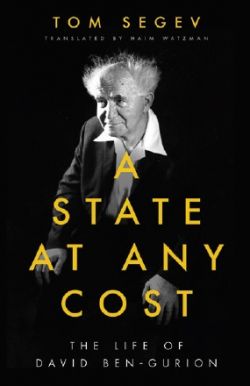 Formerly a reporter and a columnist for Ha’aretz, Segev has published nine books, most recently A State at Any Cost: The Life of David Ben-Gurion which is considered a definitive biography of Israel’s first Prime Minister. Segev paints a portrait of a man who was neither a saint nor a villain, a twentieth-century leader whose iron will and complicated temperament left a complex and contentious legacy that we still reckon with today.