Rami Kleinstein and the Piano 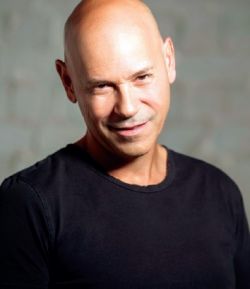 Rami Kleinstein, a triple platinum and gold album award winner, is one of Israel’s most renowned pop superstars. Known for his beautiful love songs,
soulful and captivating voice and exquisite piano playing, Rami has often been compared to Elton John and Billy Joel. Rami has had a very prolific career as both a composer and a performer, and many of his songs have become embedded in the foundation of Israeli culture.

Born in New York, Kleinstein made aliyah with his family at age eight. As a child, he studied piano and classical music and began performing with his band while he was in high school. While serving in the Israeli army as a musician, Rami performed as half of a duo with fellow soldier Rita Farouz, and they married in 1988. He composed, arranged and produced many of Rita’s songs, and she became one of Israel’s most popular singers.

Rami’s 1986 first solo album debut, “On the Day of the Bomb”, achieved gold
status in Israel. His later albums all became best-sellers and established him as
one of the most important musicians of the Israeli contemporary music scene.