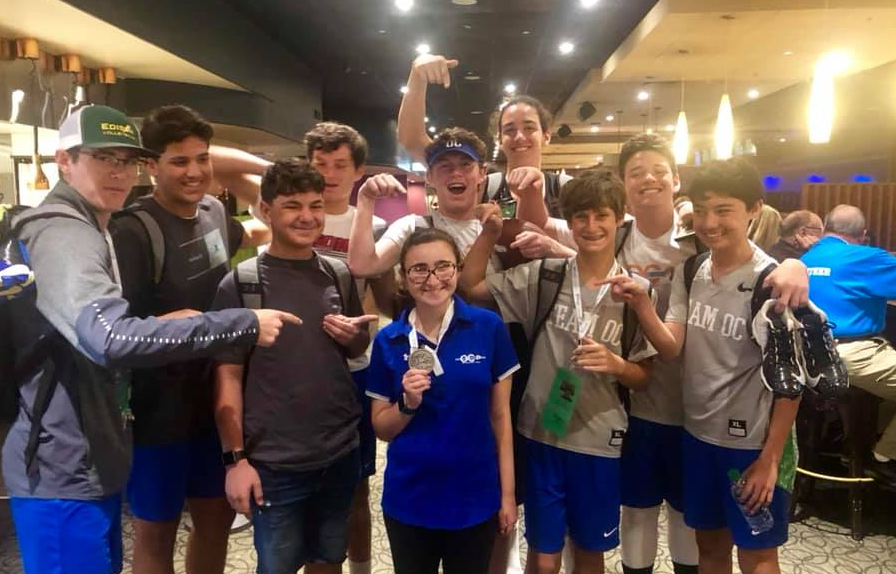 Like many of our 900 host families, Allie Morros and her family enjoyed hosting teens at last year’s JCC Maccabi Games here in Orange County. Not just a host, but a fan, Allie cheered for her sister Rachel, as she ran track and field.

This year, big sister, Rachel, had the opportunity to demonstrate that she is one of Allie’s biggest fans. She went with Allie to the JCC Maccabi Games this year in Atlanta, Georgia. This is the first year that Allie was eligible to go, because the Games international coordinator, JCCA, with support from Coca-Cola, the Merage JCC and Atlanta JCC, for the first time created an inclusive environment, so teens with special and not-so special needs could all participate. Allie was able to have her own Maccabi experience bowling for Team OC in Atlanta.

As Allie arrived with Team OC in Atlanta, she thrived, bonding with her teammates, carrying the Team OC banner at the very raucous Opening Ceremonies, and spending her days at her happy place- the bowling alley!

Allie was awarded Team OC’s first medal, a silver medal for bowling a 122 point game, just one point shy of gold score at 123. When her name was called, Allie’s face lit up and she squealed, “I didn’t know I could win anything. I was just having fun!” Her smile stretched from ear to ear as the medal was put around her neck and she gave her sister, Rachel, a giant hug.

The entire Team OC flag football team serenade Allie with cheers, taking pictures and offering her tons of high fives. Allie was beaming with happiness as she posed with her silver medal surrounded by all the boys cheering for her.

This is one week Allie will remember forever, just as her smile will forever be embedded in the memories of her many fans.

About the JCC Maccabi Games

The JCC Maccabi Games is a weeklong Olympic-style sporting event complete with opening and closing ceremonies, passing of the torch and medals for Jewish teens ages 13-16.  The Merage JCC has hosted three of the largest JCC Maccabi Games in 2007, 2013 and 2018.