OC teens go to Detroit and Atlanta for the 2019 Maccabi Games to celebrate sports, community, and more

In August, 88 teen athletes and artists represented Team OC at the 2019 JCC Maccabi Games & ArtsFest in Detroit, Michigan and Atlanta, Georgia.  For over 25 years, Orange County has sent teens to the Games.

The JCC Maccabi Games are an Olympic-style sporting competition held each summer in North America. The Games are the largest organized sports program for Jewish teenagers in the world, with over 100,000 teens having participated since 1982.

The energy and excitement that comes from bringing together both the local and global Jewish communities make it a unique and unforgettable experience for every participant.  “I played basketball for Team Cleveland as part of the JCC Maccabi Games from the ages of 14-16,” said Eddie Priesand, a coach of our Team OC Maccabi Games basketball team.  “I am still in contact with most of the players from that team 25 years later.”

Many refer to the Games program as the “Jewish teen Olympics,” it also serves a purpose much greater than just an athletic competition. The Games promote community involvement, teamwork, and Jewish pride in our teens.  “The week of travel, competition, and just spending time together brings the kids together unlike anything I have witnessed,” said Mark Pattis, fellow coach of the Team OC basketball team.  “All of the accomplishments that occur throughout the week are that much sweeter because the teens get to achieve them with their teammates.”  Regardless of awarded medals, each athlete leaves with positive memories, life lessons, and lasting friendships.”  When asked about the JCC Maccabi Games, girls’ soccer team captain Eliyah Dawson said, “They’re a great way to meet people while playing the sport you love, and everyone is Jewish, which is the coolest part!”

Like many of our 900 host families, Allie Morros and her family enjoyed hosting teens at last year’s Games here in Orange County. Not just a host, but a fan, Allie cheered for her sister Rachel, as she ran track and field.  This is the first year that Allie was eligible to participate as a teen athlete, because the Games international coordinator, JCCA, with support from Coca-Cola, the Merage JCC and Atlanta JCC, for the first time created an inclusive environment, so teens with special and not-so special needs could all participate.  Allie was awarded Team OC’s first medal, a silver medal for bowling a 122 point game, just one point shy of gold score at 123.  When her name was called, Allie’s face lit up and she squealed, “I didn’t know I could win anything. I was just having fun!” Her smile stretched from ear to ear as the medal was put around her neck and she gave her sister, Rachel, a giant hug. 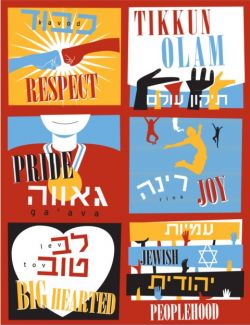 Besides the traditional bronze, silver, and gold medals, there are Midot medals which are given to teens who particularly exemplify Jewish values.  Seven of our athletes, the girls’ soccer team, and the entire Atlanta delegation received a grand total of 27 Midot medals for their spirit and superb sportsmanship.  “They earned the Midot medals for their positivity, perseverance, respect of others and the environment, and for being all around awesome!” said Catie Chase, coach of the girls’ soccer team.  “After losing our bronze medal match, everyone was a little bit down, so earning the medal definitely brought up our spirits,” said Dawson.  “It felt like such an accomplishment because it was a symbol of our rachmanus through the games.”

Click here for more information about Team OC and the JCC Maccabi Games.