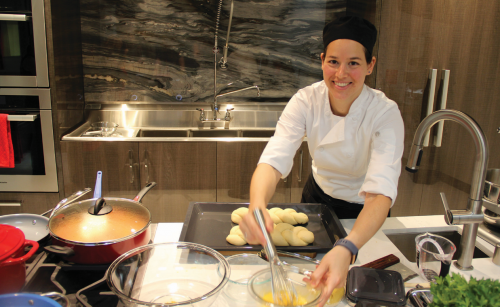 Growing up in Jerusalem, the Jewish Culinary traditions were always a part of Liron’s family life. Her father, Rabbi Uri Regev is a prominent Reform Rabbi and advocate for religious pluralism in Israel, who along with Liron’s mother, always welcomed many guests in their home for Shabbat dinner and the holidays. From a young age Liron would help her mother in the kitchen, creating the menus and preparing the food for the many guests who crowded their table.

After serving in the Israel Defense Forces, Liron attended the Culinary Institute of America in Hyde Park, NY, where she studied baking and pastry arts, and completed her degree with high honors. Returning to Israel, Liron studied Hotel, Food and Tourism Management at the Hebrew University of Jerusalem. Upon her graduation, Liron was the Sous Pastry Chef for the grand opening of the Waldorf Astoria Hotel in Jerusalem and worked there until she relocated to the US in 2015. Most recently, Liron worked at the Grand Californian Hotel at Disneyland.

Liron looks forward to continuing the rich Jewish and culinary family traditions she learned in her parent’s home with her son Eitan who is currently a preschooler at the Aronoff Preschool at the Merage JCC. She can make a mean salted caramel macaron and many more drool-worthy treats, savory and sweet.

If you have any questions about the Blaze Bernstein School of Culinary Arts contact Chef Liron Herzog at: lironh@jccoc.org.