The name of the holiday commemorates the exodus of the ancient Hebrews from slavery in Egypt, focusing on the night when G-d "passed over" the houses of the Hebrews during the tenth plague. So too, in Hebrew the holiday is called Pesach, which refers to the lamb the Jewish people were commanded to sacrifice in order to avoid the wrath of G-d during the tenth and final plague in Egypt. We are restricted from eating (or even possessing) any chametz, food containing any grain product (wheat, barley, oats, spelt and rye) which has been allowed to ferment in water.

Passover is celebrated for 7 days in Israel and for 8 days in the Diaspora. The holiday begins with a ritual meal called a seder,  which means "order". The haggadah is a book
which is used to tell the story of exodus from Egypt and describes the order of the seder meal. There are a number of symbolic foods laid out on the table, of which are the Matzah, the unleavened "bread of affliction," the Zeroa (shank bone), symbolizing the Pesach sacrifice in the ancient Temple in Jerusalem, and the Maror (bitter herbs), symbolizing the bitterness of being slaves in Egypt.

3 Matzot on the Seder Plate 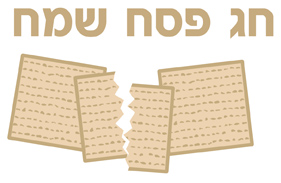 40 Years wandering in the desert